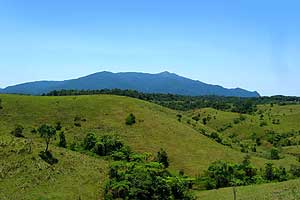 The area of the Atherton Tablelands is largely covered by many basalt lava flows.

To the South, the lava flowed down to the East Palmerstone area. To the east, the flows are held back by the metamorphic and granite of Bartle Frere, Belenden Ker and the Tinaroo Ranges. The flows extend north to Mareeba.

To the west, huge acid volcanic flow mixed with older metamorphic and newer granite form the great dividing ranges. This area is rich in minerals. 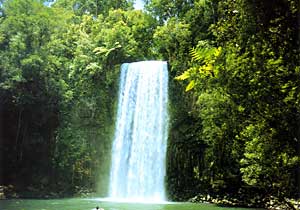 The Tablelands is one of the riches and most diverse biological ecosystem in Australia. The more arid northern half has open eucalypts forest similar to much of the tropical outback while the higher rainfall of the southern half permit dense tropical rainforest to flourish. Wet Scierophyll and Mabi forests add to the natural diversity of the region.

The ancient rainforests of the Tablelands are richer in species than other tropical forests with rare trees like the Stockwellia only recently discovered. These forests contain wild life only found in the North such as the cassowary and quolls and insects like the Cairns Birdwing butterfly along many primitive species that are relicts of Gondwanaland fauna. 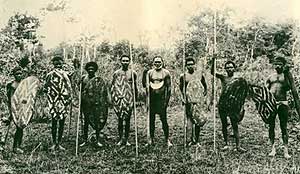 The Mamu to the south the Ngadjon in the middle and the Yidinji to the north. To the west is the country of the Jidabal and Barbarum.

These rainforest peoples were short in stature with tight curly hair. They used vibrantly painted shields and large wooden swords. 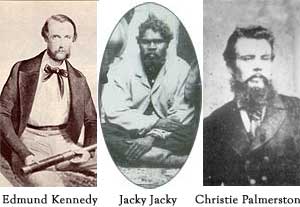 Edmund Kennedy, Jacky Jacky and 11 men explored Cape York Peninsula in 1848. They landed at Kennedy Bay, struggled through mangrove swamps and rainforest to reach the Herbert River,and crossed it at a point just east of Mt Garnet. They skirted the mountains near Irvinebank and picked up Emu Creek and followed north Only Jacky Jacky made the whole trip to the ship at Albany Bay.

Christie Palmerston is believed to be the first white man to pass through this area, the beautiful Palmerston Highway is a lasting memorial to this fearless explorer. On his trips from Herberton through to the coast he camped at the foot of the renowned Millaa Millaa Falls. In his travels he established a good relationship with the Aborigines and came to understand them well, this before their contact with white men changed their way of life forever. 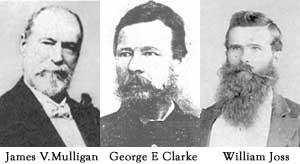 James V Mulligan was the greatest prospector of the far North, not only did he find the payable gold on the Palmer River and the Hodgkinson goldfield, but also the first silver in Qld at Silver Valley and reported finding tin at Herberton during his 1879 expedition when he was the first to pass though the Mareeba area and on pass Atherton were he was the first to see the great rainforest. Later he worked the copper at Mount Molloy.

George E Clarke‘s main claim to fame was the discovery of Charters Towers, but here he joined his friend William Joss, with whom he had earlier found gold at Yatton, and along with Palmerston, they discovered gold at the Russell River. Clarke also cut a road across the tablelands from Herberton to the coast. Joss was the first European to sight the Tully Falls, then went on to prospect the tin fields and discovered the rich Stannary Hills field.

HISTORY ENTHUSIASTS ARE WELCOME TO ATTEND OUR MEETINGS:

CLICK HERE to read the current issue of the EHS Newsletter. The Newsletter is published and mailed out to all members every two months.

Contact us regarding your research projects. Please: - phone - (07) 4096 6239 (Thursday only, 9am to noon),Leave a message OR- fill in and send this RESEARCH REQUEST