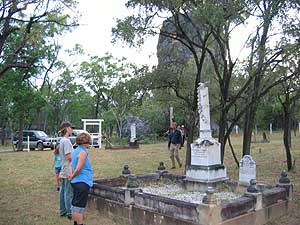 Following research into the 1889 murders of miners on the Russell Goldfield, a project to locate and mark several known graves on the goldfield is to commence.

A project to identity and mark the original burial ground at the old town site of Mungana is proposed before knowledge of these graves are lost to history.

The neglected grave of Mr Fred Walters who was murdered in 1928 in the Boonjie scrub and was the subject of one of our early books is to be relocated and restored and properly marked with a plaque.

The Prohorov family returned to Russia in 1923 where Aleksandr continued his studies graduating with distinction from Leningrad University in 1939. He was awarded the Nobel Prize for physics in 1964 thus being the first Queensland born scientist to be so honoured.The AM Prokhorov General Physics Institute in Moscow was named in his honour.

A project to bring more natural light into the museum as been carried out and most of the displays are now behind Perspex which not only protects the artifacts from removal but keeps dust a bay.  The old Ambulance records books which go back to 1926 has been rebound in leather and the indexing of names to assist visitors to find their ancestors and some interesting facts about what had happened to them have been carry out.  The new computer has been useful in putting the hand written inventory into a digital format and it is hoped some of the volunteers will lose their reluctance to use the new technology and make further use of it for perhaps some research.

EPA Cultural Survey
The EPA is currently doing a cultural survey of the Tablelands Shires,as part of a state wide survey to identify places of state significence. The Eacham Historical Society has been assisting the Environmental Protection Agency in identifying places of cultural significence on the Tablelands for inclusion. In the latest EPA newsletter members of the EHS have been thanked for their help. If you know of any sites of cultural significence please contact RaySupple of the EPA – ph: 4046 6732.

Publication Reprinting Project
Petrina and her team are gathering information to complete the rewrite of the Malanda, In the Shadow of Bartle Frere book. It is hoped to publish this new edition later this year.

School Data Base
A project has commenced to build up an anthology of data concerning the many defunct schools of the tablelands in order to assist those researching their family history.

HISTORY ENTHUSIASTS ARE WELCOME TO ATTEND OUR MEETINGS:

CLICK HERE to read the current issue of the EHS Newsletter. The Newsletter is published and mailed out to all members every two months.

Contact us regarding your research projects. Please: - phone - (07) 4096 6239 (Thursday only, 9am to noon),Leave a message OR- fill in and send this RESEARCH REQUEST